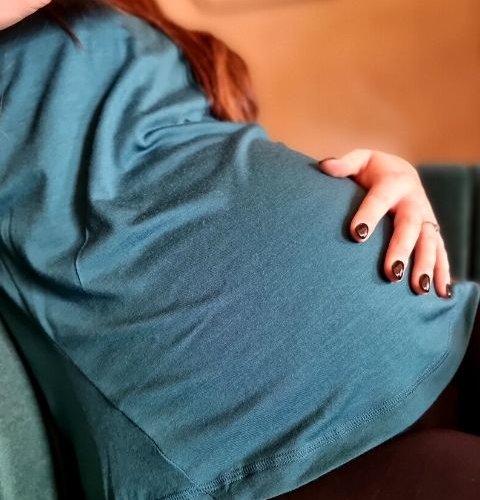 What does sustainability mean to us in KOJO?

SUSTAINABILITY is difficult to achieve in the clothing industry, and especially with clothing that is only used for a certain period of life. KOJO and I strive for that. END_OF_DOCUMENT_TOKEN_TO_BE_REPLACED 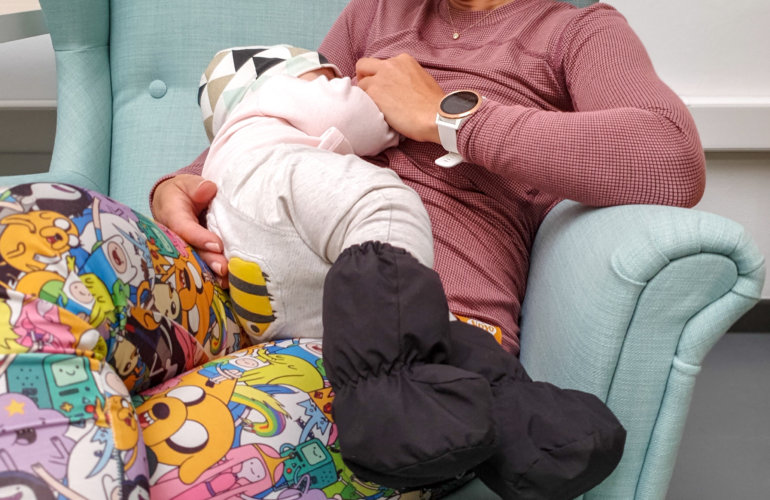 What foods to eat during breastfeeding?

Expectant mothers pay attention to certain foods during pregnancy, such as sushi, blue cheese, or uncooked foods. Which certainly has its justification and protects itself and the child from various unpleasant diseases.
But does it make sense to deny something that your mother’s body explicitly wants after the birth of your baby? According to information from lactation association Mamila:
Mothers can eat everything without restrictions and a specific reason is needed to exclude any food, there is no need to exclude some foods as a precaution or as a lump sum.
In fact there is no need to follow any special “diet” or to exclude food from the diet during breastfeeding. Many breastfeeding women, in a sincere effort to do their best, eliminate so much food from their diets that they lack the nutrients and energy to care for a baby.
I am convinced that breast milk is a uniquely and precisely mixed cocktail tailored to the baby and breastfeeding is the best that a mother can provide for her baby.
My personal experience is like this – after both births, I was terribly thirsty, especially in the first weeks. Especially at night, and I didn’t mind if I drank 3 or 4 liters of water a day, the body just asked. I had a huge sweet taste after the birth of both children. It was definitely not ideal and what I avoided more during my pregnancy – I enjoyed various biscuits and cookies without remorse. Breast milk production means an increased burden and increased energy expenditure for the mother’s body. Certainly there were also energy deficits, which were lost due to lack of sleep. Also for this fact because I liked my coffee. Only 2 cups a day, it kicked me, the children didn’t even mind sleeping, and I made the day more pleasant and wrapped my nerves 😀
There are “Forbidden Foods During Breastfeeding” and a list of them can certainly be found. But I think every mom should test her baby, and not immediately rule out foods that actually have a positive effect. The baby gets used to different tastes and breast milk protects the baby’s digestive tract and strengthens his immunity. It is not true that citrus fruits reduce milk production. It is not true that omitting potential allergens will protect the child from allergies (rather, the opposite is probably true).

After a repeated attempt, my son was confirmed that he didn’t like cabbage and his belly had a problem with it. Otherwise nothing. And the daughter? She cried for the first three months no matter what I ate. 😀
And so the conclusion?
It’s good if a breastfeeding woman eats healthy – she needs a healthy diet like any other person 😀 And every body and creature is unique, so I recommend going the trial and error system. Try what doesn’t suit you. One weeping day is negligible from the point of view of motherhood, even though at that time the days for the new mother are only good and bad 😀 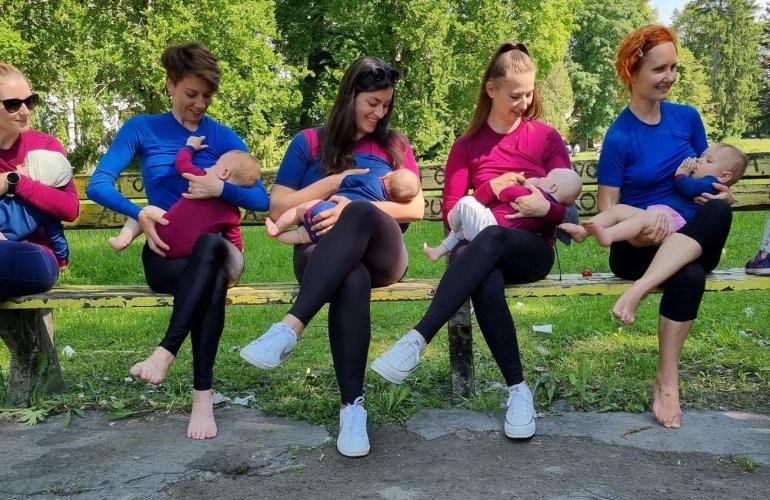 How to dress during breastfeeding so that access to the breast is easy and at the same time so that you feel comfortable and look good? This is the reason why KOJO was created! The creatively designed designs of breastfeeding T-shirts in conjunction with the functional materials from which our T-shirts are made predestine them to become a popular piece in your wardrobe during the entire breastfeeding period.
KOJO T-shirts together with our sports bras for breastfeeding will be appreciated especially by active mothers – when hiking, exercising, running or walking. KOJO T-shirt thanks to the material from which it is sewn – whether it is merino wool or modal dries quickly and removes moisture from the body.
When you’re sweaty, whether in the mountains or in the city / and it’s not even cold / it’s the last thing you want to deal with, look for breasts in a normal T-shirt with a crying hungry baby 
KOJO clothing is designed to allow you to access the breast with one hand. And the t-shirt looks as if you were wearing normal clothes, without the shapeless part around the abdomen and does not look like it is specially designed for breastfeeding. Thanks to this, you will definitely use KOJO even after breastfeeding 🙂
The main idea of ​​KOJO is for women to remain active even after giving birth, when they become mothers, and for their babies to become part of their active life.
We are constantly expanding the KOJO offer with athleisure pieces for mothers, but also more elegant ones. We offer breastfeeding clothes suitable for winter, as well as those that are suitable for summer. However, the production of T-shirts still remains local in Slovakia, while we take the material from suppliers from Slovakia and the Czech Republic.
KOJO is a place where you buy quality clothes for breastfeeding and you will definitely be satisfied with it. We guarantee an exchange if the size does not suit you and a refund if you decide to return the goods.
We wish you beautiful days with your baby.

KOJO breastfeed in action- yes you can!

Have you ever gone shopping just for fun?? (?? text below)You were in a bad mood, you were missing something, so to cope with that you ended up going shopping?! It’s happened to me, and not only once, but currently I really consider what to buy and where to spend my money?. There are a lot of important things that one wants to have, and in this difficult period you also need to treat yourself well?. But I try to consider carefully what I really need, and try not to spend too much on trumpery. A lot of stuff could be repaired, borrowed, bought second-hand (and reuse to its full potential) or even made by ourselves. Speaking of re-using, I´m already wearing this KOJO modal T-shirt with my second son and it´s still top quality despite being my favourite thing in my wardrobe ?. 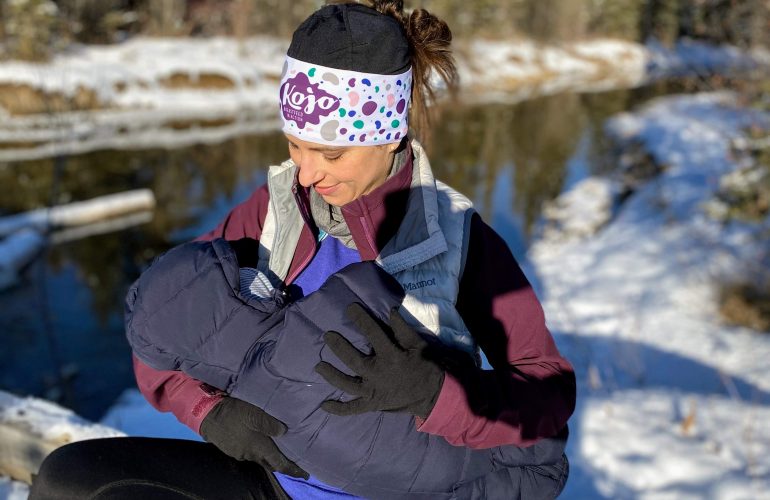 We use cookies on our website to give you the most relevant experience by remembering your preferences and repeat visits. By clicking “Accept All”, you consent to the use of ALL the cookies. However, you may visit "Cookie Settings" to provide a controlled consent.
Na našich webových stránkach používame súbory cookie, aby sme vám poskytli najlepšie zážitky tým, že si zapamätáme vaše preferencie a opakované návštevy. Kliknutím na „Accept All“ vyjadrujete súhlas s použitím VŠETKÝCH súborov cookie. Môžete však navštíviť „Cookie Settings“, aby ste poskytli kontrolovaný súhlas.
Cookie SettingsAccept All
Manage consent

This website uses cookies to improve your experience while you navigate through the website. Out of these, the cookies that are categorized as necessary are stored on your browser as they are essential for the working of basic functionalities of the website. We also use third-party cookies that help us analyze and understand how you use this website. These cookies will be stored in your browser only with your consent. You also have the option to opt-out of these cookies. But opting out of some of these cookies may affect your browsing experience.
SAVE & ACCEPT
Select your currency
EUR
CAD
USD

Our production process and KOJO active-wear materials are the guarantee of top quality products. Everything is designed and produced with love in a sustainable and eco-friendly way in Slovakia, Europe.

Our company is based in Slovakia- Europe, we are flexible and happy to answer your questions from any part of the world. Do not hesitate to contact us.
Phone: +421908812818
Email: mama@kojo.shop
FacebookInstagran

Be the first to find out about our new products, secret offers, useful tips on how to live a healthy life, as well as some interesting information about breastfeeding and much more.